Male reproduction is controlled by hormones. Learn about this process, including how males change as they experience puberty. Explore the HPG Axis, the hypothalamus, the anterior pituitary, LH, FSH, gonads, testosterone, and inhibin. Updated: 08/24/2021
Create an account

Ah, puberty! Who doesn't miss those awkward days of pimples, voice changes, hormones raging and all the social awkwardness that come right along with it? Those were the days, right?

Okay, maybe not so much, but have you ever wondered what causes all those changes? Why does your voice all of a sudden sound like it's broken, or your face turn into a breeding ground for pimples or your hair start growing all over the place?

Behind it all are three very important structures: the hypothalamus, the pituitary and the gonads, or testicles in the case of males. Together these structures make up what is called the HPG axis.

And it all begins in the brain! Puberty, that is. You see, your brain gets tons and tons of different signals from both the outside environment and your internal environment - signals like weight, age, social cues, and others that all send information to the part of your brain called the hypothalamus. 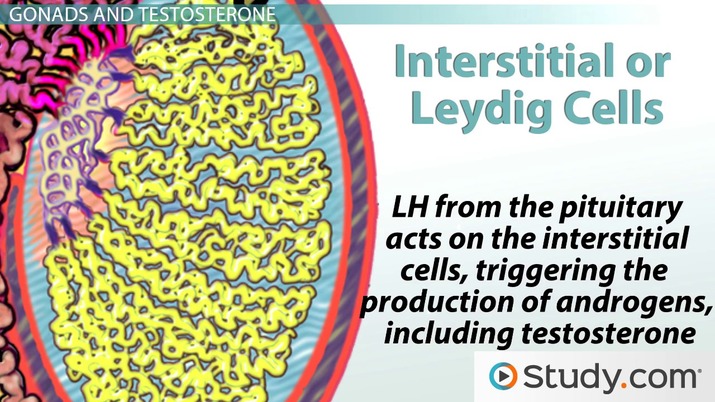 The hypothalamus is located at the bottom, middle portion of your brain, right above another structure called the pituitary. The hypothalamus has many functions, but in this lesson, we're going to cover those involved in reproduction. These functions include:

Both of these involve key hormones within the hypothalamus. We are going to focus on one of these hormones, called GnRH. 'GnRH' is actually short for the full name of the hormone, which is 'gonadotropin-releasing hormone.' Now, while you need to know the full name of the hormone to help you understand its function, to simplify things, we're just going to call it GnRH. This hormone is involved in both functions of the hypothalamus.

At puberty, the amount of GnRH being made increases by a lot! This large increase is involved in triggering puberty. As you will see, GnRH is just one hormone in a whole cascade of hormones that control male reproduction and sexual behavior. GnRH is like a messenger that tells other hormones to jumpstart testicular function at puberty and helps control reproductive function throughout life. If you were to block GnRH, then sperm production wouldn't occur.

GnRH communicates with two specific endocrine cells within the anterior pituitary. These cells release hormones called gonadotropins. Ah - where have we heard that term before? Sounds familiar, right? Oh yes, I remember! Remember what 'GnRH' stands for? 'Gonadotropin-releasing hormone.' See, I told you that remembering its name would be important. The function of GnRH is right there in its name. It releases gonadotropin hormones from the anterior pituitary.

Okay, so what are gonadotropins? There are two gonadotropins, actually - luteinizing hormone (or LH for short) and follicle-stimulating hormone (or FSH for short). Each of these hormones has specific roles in aiding male reproductive functions. When GnRH acts on endocrine cells containing LH or FSH, these two gonadotropin hormones are then released into the bloodstream, where they travel to the last structure in the HPG axis - the gonads. In this case, when we're talking about gonads with males, we're talking about the testicles.

Both LH and FSH target specific cells within the testicles. If you're familiar with testicular anatomy, you may recall that the testes have two main divisions. There are the seminiferous tubules where sperm production takes place and then there are the interstitial spaces, or the spaces in between the tubules that are filled with cells and tissues. Now, don't disregard those spaces in between the seminiferous tubules quite yet. You see, even though they aren't making sperm like our tubules are, they are still really important.

It is within these spaces where the testosterone-making cells live! That's right, without these spaces, the testes wouldn't be producing any testosterone, and we all know how important the male sex hormone is!

These cells, called interstitial or leydig cells, are indeed the infamous testosterone-making cells! But, they don't do it all on their own. They need help to do this. That help comes from LH. LH from the pituitary travels down to the testes, where it acts on the interstitial cells, triggering the production of androgens, including testosterone.

Ah, now what does testosterone do? Well, we all know that it is the male sex hormone and that athletes can take it to get big muscles! But, it has more important roles than just making your muscles bigger. Most of the testosterone stays testosterone, but before we talk about its functions, let's talk about the small amount that doesn't stay testosterone.

Say around 5% of a male's testosterone is actually converted to another androgen, a super-testosterone if you will, called DHT or dihydrotestosterone. DHT is what causes all that extra hair growth that males have and enlarges the male's external genitalia - you know, all those things that makes a man, well, a man, hence the term 'super-testosterone.' Now, just wait a second, guys - before you go and start trying to figure out how to get more DHT, I feel like I should warn you: excess DHT in males is also what causes male pattern baldness…just a thought. Sorry, DHT - but now, let's get back to our main androgen, testosterone!

The first job of testosterone is to travel into the seminiferous tubules. Once inside, testosterone and our other gonadotropin, FSH (you didn't forget about that one yet, did you?), both stimulate cells called nurse cells. These are the cells that regulate and promote sperm production.

The second job of testosterone brings us to something called negative feedback. Remember how we said that GnRH is released in pulses and not continuously? That's because it's subject to a process called negative feedback. All hormones in your body need to be regulated somehow. Negative feedback does just what it says. This is when a signal, usually a hormone, is sent from one or more cells and travels back to decrease or stop the release of another hormone.

So, now that you have an understanding of what negative feedback is and how it works, we're going to talk about another hormone involved in negative feedback of the HPG axis. Let's go back to that other gonadotropin, FSH, for a bit. We already know that FSH and testosterone work together to promote sperm production, but that's not all FSH does.

When FSH reaches the nurse cells, it triggers them to secrete two products. The first is androgen-binding protein, and it does just what it says - it binds androgens, including testosterone, so that they cannot leave the seminiferous tubules. That way, testosterone stays in the tubules to help sperm production. The second, inhibin, negatively feeds back to the pituitary, where it tells the endocrine cells releasing FSH to decrease FSH levels. This, in turn, decreases stimulation of the nurse cells so that sperm production can be controlled.

Phew! That's a lot of information, but I think we've got it all covered. Who knew male reproduction was so complicated? And remember, this all starts at puberty, but unlike females, who are born with a certain number of eggs, male sperm production actually continues all the way into old age.

That's right, guys - keep making sperm all the way into old age! Now wait, before you get too excited, I feel I need to tell you - even though you keep making sperm, your testosterone levels decrease and so your sperm quality and amount also decrease as you age. It's still there, but just like the rest of your body declines with old age, so does your sperm.

Okay, before I let you go, let's go through a quick review. Boy hits puberty, boy's HPG axis kicks into gear, triggering the hypothalamus to produce GnRH. GnRH is released in pulses. It travels to the anterior pituitary, where it releases LH and FSH. LH and FSH both travel to the testes, where LH stimulates testosterone production in the interstitial cells and FSH stimulates sperm production and the release of androgen-binding protein and inhibin.

And don't forget that this whole signaling pathway has to be regulated somehow. I mean, we can't just have all these hormones being produced with no way to control them, right? That's where negative feedback comes in. In this system, testosterone feeds back to the hypothalamus to decrease GnRH, and inhibin feeds back to the pituitary to decrease FSH production.

And that's it - the control of puberty and male reproduction comes down to a handful of hormones that all work together. If you were to take just one of these hormones out, the whole signaling pathway would be messed up. Think about what would happen if LH was blocked. Testosterone wouldn't be produced and it couldn't aid in sperm production. Or, what about FSH? Then, androgen-binding protein wouldn't be released, and so the nurse cells would have no way of keeping testosterone in the tubules.

After viewing this lesson, you'll be able to explain how the male HPG axis works and explain the function of the hormones within it.

The Mechanisms of Hormone Action

Spermatogenesis Diagram & Function | What is the Process of Sperm Production?

Menstrual Cycle Phases & Importance | What is a Period?