Lesson Transcript
Instructor: Natalya Barker
Punctuated equilibrium is a scientific hypothesis of the reasons why curious patterns found in the fossil record signify the presence of a new species previously unknown to have appeared on Earth. Explore a definition and explanation of the theory of punctuated equilibrium, and find examples of curious patterns in fossil records. Updated: 09/15/2021
Create an account

Scientists attempt to explain the world around us. They do this through a series of proposed explanations for observed phenomena called hypotheses. These hypotheses are then tested over a period of years to determine if they are supported by facts or if they need to be revised.

Big, complex concepts and observations often have many different hypotheses attempting to explain bits and pieces of the concept all at once. Take, for example, evolution. Scientists have long studied how new species come to be in the world and how these new species descend from ancestors. The exact mechanism that drives this speciation still eludes scientists to some extent, so they are constantly attempting to come up with hypotheses to try and explain their observations.

One major observation about the world around us has to do with when new species appear in the fossil record. If you look through the record, you'll notice that there is a long time where there doesn't seem to be any new life forms on Earth, and then suddenly, boom! We get all these new species, all at once. This is punctuated equilibrium. Punctuated equilibrium is a hypothesis devised to explain a pattern of change in the fossil record and how closely related species appear in nature. The hypothesis states that individual species tend to show little or no change over a long period of geological time and then enter a period of rapid change, which gives rise to new species. 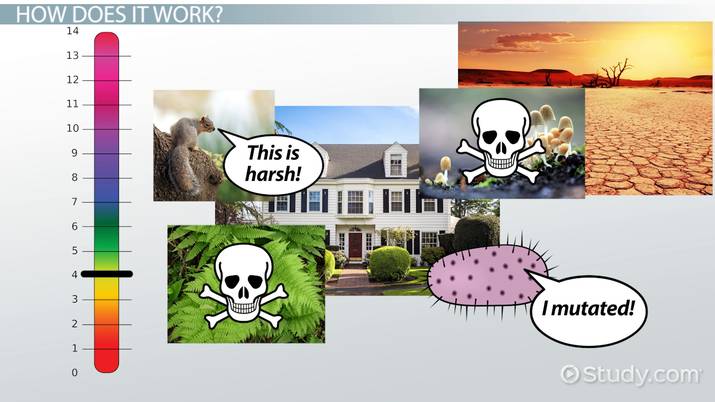 How Does It Work?

Look around you. Do you see all those animals, plants, bacteria, fungi, and viruses around your house and yard? Do you notice any one of them changing? Probably not. Most species are in stasis, a state of stability in which all forces are equal and, therefore, cancel each other out. When a species is in stasis, it's not experiencing any evolutionary pressures, those environmental forces that change birth and death rates in living things, causing species to have to evolve to better handle the pressures. An organism in stasis has no need to evolve - everything is just fine and dandy, so why waste the effort?

But what if something changes in your yard? What if the pH changes in the soil, or suddenly all the water evaporates and it never rains again? All those plants, animals, bacteria, and fungi would experience a harsh environmental change. Many would die. Some would mutate and evolve to handle the new pH levels or the new, drier environment. After several thousand generations, those that survived would probably look different than those that came before, and you would see a whole mess of new species in your backyard.

This is an example of punctuated equilibrium. Species spend most of their generations in stasis - not needing to change because the environment is stable. But every once in a while, a major change comes along, and those life forms affected by that change evolve into something new or die out completely.

This change happens relatively rapidly in terms of geologic time, so we end up seeing a whole bunch of new species within a few thousand years and then millions of years of very little change. Each short burst of change is the 'punctuated' portion, while years of stasis is the 'equilibrium' portion of the hypothesis. That is, there are long periods of species staying the same, punctuated with short periods of species changing very quickly.

Is This the Answer?

As with all hypotheses, punctuated equilibrium has its supporters and detractors. Some scientists believe that this hypothesis beautifully explains the big gaps in new species we observe in the fossil record and why we don't see lots of new species showing up all of the time.

Other scientists think there might be other explanations as to why there are fossil record gaps, and that organisms are constantly changing very, very slowly - we just don't have records of all of the changes in fossil form. As scientists study evolution and fossils more and more, they will undoubtedly discover more and more evidence that can used to refine the various hypotheses concerning evolution. Someday, as more evidence is gathered, scientists should be able to fully support or completely disprove punctuated equilibrium.

Punctuated equilibrium is a hypothesis of evolution that attempts to explain the pattern of speciation observed in the fossil record. It states that organisms are in stasis until a major change causes evolutionary pressures, which result in a rapid burst of speciation until stasis is again reached.

What is Anagenesis? - Definition & Example

What is Team Effectiveness in Organizations? - Definition, Models & Assessment

What is a Gene Pool? - Definition & Example

What Is a Subspecies? - Definition & Distinctions